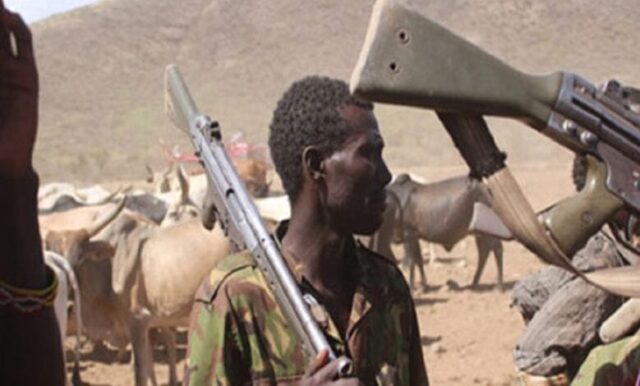 Suspected Fulani herdsmen were said to have abduct a pregnant woman and two others in Ogun, demanding a ransom of N30 million.

It was gathered that the abductees were taken away on Sunday evening along Igbo-Ora-Sokoto road, Abeokuta North Local Government Area of Ogun State.

The victims had paid a visit to their friend who resides at Rounder area of Abeokuta, the state capital.

A source informed that the kidnappers laid an ambush for three persons at an area known as Karigo, saying the pregnant woman is in her eighth month.

According to him, the herdsmen had contacted the families of the victims on Tuesday, asking them to pay N10 million each for their release.

It was said that two other persons on the trip escaped when the kidnappers accosted them.

“We got information that at the abattoir in Roundabout that kidnappers abducted three persons.

“The kidnappers did not call immediately but they called on Tuesday, asking for N10 million on each victim as ransom. There is a pregnant woman among them, who would soon give birth,” the source said.

“It was gathered that the victims parked their car because the road is bad, but while trekking, they were ambushed by their kidnapers

“The abductees were two women and one man, identified as Baba Sandra.

“One of them is a thrift collector in the market here (Itoku market ); one is a civil servant but we don’t know where the other one works,” it was learnt.

“The husband of the pregnant woman was one of the two that escaped being kidnapped,” the source informed

However, Oyeyemi said the victims had organised a prayer session in the forest where they were captured.

“Since that very day, our people have been on their trail. In fact, while I was discussing with the OC (Officer in-charge), they were still in the bush in that area trying to get all those people.

“But, our people should also be careful, they should stop organising prayers inside the forest,” he said.