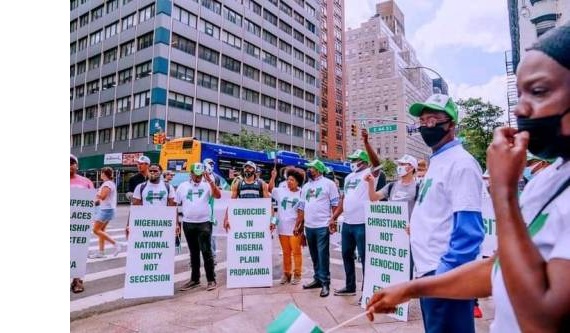 The Nigerian Government is hiring black foreigners living in the United States of America (USA) with $500 per head to stage a Pro-President Muhammadu Buhari and One Nigeria March opposite the United Nations Headquaters in New York, a separatist leader has said.

Prof. Banji Akintoye, the Chairman of Nigerian Indigenous Nationalities Alliance for Self-Determination (NINAS), alleged that the protest will be staged on Friday, September 24, 2021.

The indigenous people of the South and Middle-Belt of Nigeria under the aegis of NINAS had staged what it tagged “Million-Man Freedom March” on September 14 and 15 opposite the United Nations Headquaters in New York to demand a referendum in Nigeria.

The march was also to show the world the crimes against humanity, attacks on press freedom, free speech and other atrocities going on under Buhari-led government.

NINAS is demanding the conduct of a regional referendum so that indigenous people can decide if they want to leave Nigeria or not.

The group also described the 1999 Constitution of Nigeria as a fraud against the people of South and Middle-Belt, saying “it was enacted without the consent of the people”.

NINAS is also demanding from the United Nations that a Fulani Militia Group masquerading as a Trade Union, Miyyetii Allah, should be declared as a terrorist organisation, saying it has openly taken responsibility for a series of deadly attacks in the South and Middle-Belt regions.

The Grand Finale of the NINAS Million-Man Freedom March holds on September 24, 2021, the day President Buhari will be addressing the 76th Session of the United Nations General Assembly.

Akintoye, in a statement made available to journalists through the NINAS Director of Public Communications, Mr. Maxwell Adeleye, said no matter how the Nigerian Government tries to scuttle the NINAS Grand March, the will of the people shall prevail.

He described NINAS protesters as the Foxes, saying “irrespestive of the material and financial superiorities of these Lions, there’s no way they can defeat United Foxes in a democracy.”

He said, “The Friday Grand March in New York shall be historic, hence, the Nigerian government is jittery. The Ring Leader of Government officials from Kwara State and a top Lagos journalist are now in New York to start hiring black people who will pretend as Nigerians to stage a Pro-Buhari and One Nigeria Protest to counter NINAS on Friday.

“All the people of the South and Middle-Belt in United States and Canada are urged to troop out in their large number to be present on Friday, 24th September 2021 opposite the United Nations Headquaters in New York as we demonstrate and expose before the world, the rape of our ancestral lands and hijack of our assets and sovereignty by the Fulani-Controlled Nigerian Government.

“I salute the Nigerian mainstream media and International Media that have been covering the March to remain resolute and stand by the truth.”