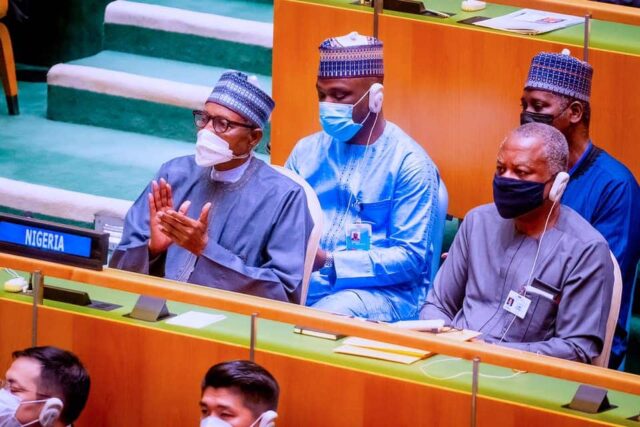 President Muhammadu Buhari has reiterated calls for review of the eligibility criteria for debt suspension, including outright cancellation for developing and least developed countries.

Buhari made the call while speaking at the ongoing 76th session of the UN general assembly in New York on Friday.

He told the world leaders to urgently consider expansion and extension of the debt service suspension initiative.

In May, the president told European countries and global financial institutions to consider loan restructure or complete debt relief for African countries to help reduce the impact of the coronavirus pandemic.

In the wake of the COVID-19 pandemic, G-20, a group of finance ministers and central bank governors from 19 of the world’s largest economies, along with the European Union, established a debt service suspension initiative (DSSI).

The initiative, according to World Bank, had delivered more than $5 billion in relief to more than 40 eligible countries, including Nigeria.

The suspension period, originally set to end on December 31, 2020, has been extended through December 2021.

“On the issue of debt, we have seen that developing countries have been faced with unsustainable debt burdens even before the pandemic. The COVID-19 pandemic has increased the risk of new wave of deepening debt, where vital public financial resources are allocated to external debt servicing and repayments at the expense of domestic health and financing for critical developmental needs,” Buhari told world leaders during UN session.

“I must commend the current initiatives by the international financial institutions and the G20 aimed at significantly mitigating the economic situation of the indebted countries and urge for more efforts in this regard.

“Therefore, there is an urgent need to consider expansion and extension of the Debt Service Suspension Initiative to include all Developing, Least Developed Countries and Small Island Developing States facing fiscal and liquidity challenges.

“In addition, a review of the eligibility criteria for debt suspension, including outright cancellation, is needed for countries facing the most severe challenges.”

The president, who acknowledged global efforts, said Nigeria remains concerned over illicit trade, transfer and circulation of small arms and light weapons in the country.

“Their excessive accumulation and uncontrolled spread in many regions of the world are having devastating humanitarian and socio-economic consequences, especially on the continent of Africa,” he added.

“It is on this note that my delegation calls for the worldwide application of the Arms Trade Treaty to codify accountability in the conventional arms trade, which is critical to the security of nations.

“This is in recognition of the need for a broad-based global partnership in the ongoing battle against trans-border crimes, including terrorism and piracy.”

Why you should choose Microsoft over Linux