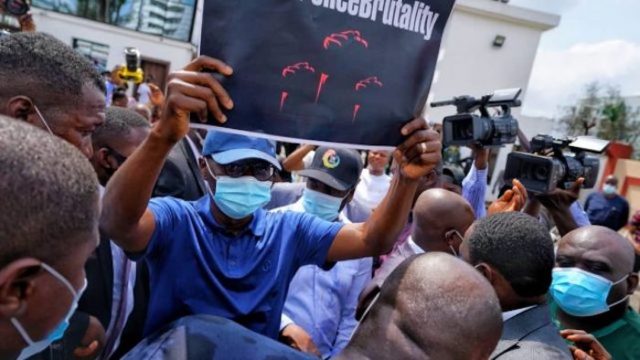 With lessons drawn from the string of violence that followed the youth-led nationwide protests against police brutality in October last year, Lagos State Governor Babajide Sanwo-Olu, on Tuesday, brokered a reconciliation with youth in the state, promising not to give up his belief in them.

Youngsters across the state used the opportunity of Tuesday’s Eid-Maulud national holiday to come together to participate in a peace conference aimed at creating a common platform for conflict resolution.

Sanwo-Olu, who attended the peace forum, listened as the youth-led conversation on how they could effectively channel their grievances to the authorities.

The event themed, “Rebuilding for Greatness: Peaceful Conflict Resolution,” held at the LTV Blue Roof, in Ikeja was organised by the Ministry of Youth and Social Development and facilitated by the governor’s Senior Special Assistant on Youth Matters, Saheed Akanbi.

A seven-man discussion panel moderated by Mazi Sam Uche Anyamele, a filmmaker, set the tone for the governor’s response to various suggestions and ideas shared by youths at the event.

With a commitment to peace pledged by the youth, the governor, who declared that the moment for true reconciliation had begun, said Lagos could now undergo a total healing process after last year’s coordinated attacks on its assets, which also resulted in loss of lives and livelihoods.

Sanwo-Olu said, “Today is a day of reconciliation and it is about our teeming youths. This is the moment to create a common ground and take ownership of our future. We have, indeed, assessed what we have passed through as a people; it’s now the moment to come together and build our lives together.

“This event is about aggregating all the conversations of the millions of youths that have been represented here. All of us have agreed that, when we work together, we can build a resilient society we will truly be proud of. We will continue to build, engage and work with our young people.

“I certainly will not give up on you as partners in progress and your ability to bring about positive changes.”

The governor added, “I thank all the youths, who participate in this forum, for the valuable suggestions offered and the ideas shared. I’m taking full responsibility and ownership of all the feedback recommended for me here. All the points have been taken and I will continue to rely on them in the course of governance.”

Commissioner for Youth and Social Development, Hon. Segun Dawodu, said the state government recognised the youth as stakeholders in peace building and violence prevention. Dawodu stressed that the governor’s physical presence at the event was an indication of his commitment to addressing the issues faced by the youth.

Represented by Permanent Secretary in the Ministry, Dr. Oluwagbemiga Aina, the commissioner said the aftermath of negative conflicts would never be beneficial to any society.

The keynote speaker and Deputy Vice Chancellor of the Lagos State University (LASU), Professor Wahab Ellias, said the theme of the event connoted a resilient city. Ellias stated that conflict remained endemic and part of the society’s makeup.

EPL: Wenger Reacts To Arsenal’s Poor Start, Speaks On Taking Over From Arteta

Nigeria A Failed State Pretending To Be Normal – Moghalu