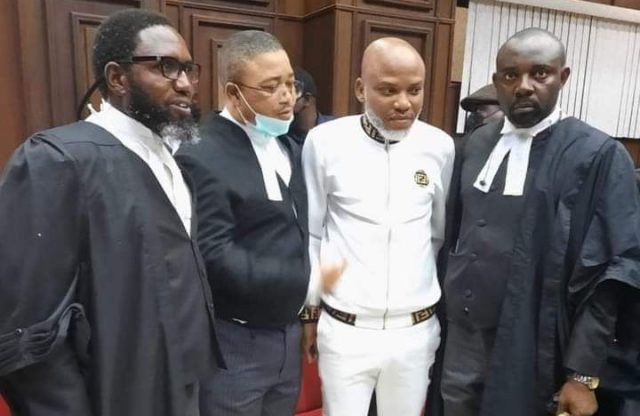 The leader of the Indigenous People of Biafra (IPOB), Nnamdi Kanu has arrived the Abuja Federal High Court for the continuation of his trial over allegations of terrorism and treasonable felony.

Operatives of the Department of State Services, DSS, brought Kanu into the court premises at about 8 am.

The agitator was driven into the premises in a convoy of about six vehicles.

The convoy was led by a black Prado jeep, followed by two Hilux vans, two buses, and two other Hilux vans.

Meanwhile, a combined team of security operatives of DSS, Nigerian Army, Police and the NSCDC have cordoned off all entrances leading to the court.

The Nigerian government had arrested Kanu in 2017 but Justice Binta Nayko of an Abuja Federal High Court granted him bail.

Kanu, however, jumped the bail and fled Nigeria.

The IPOB leader claimed that he fled Nigeria due to an attempt on his life by the Nigerian Army.

However, Kanu was rearrested in July in Kenya and repatriated to Nigeria to continue his trial.

SpringFest One Fashion Show at the University of Michigan

No Vibes Killer Here – Tuface Idibia Speaks From US