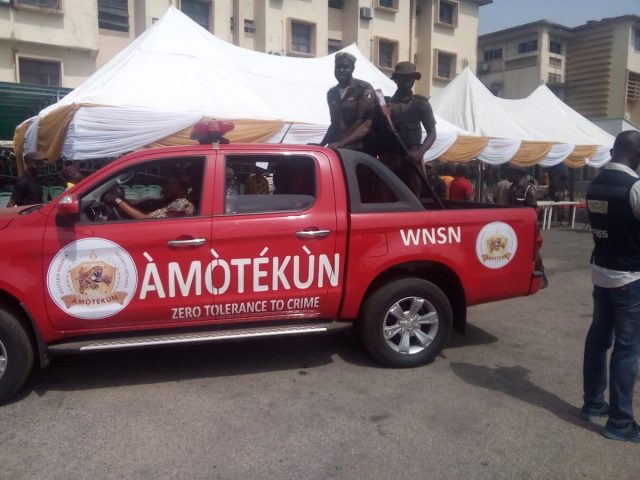 Prominent Yoruba leaders on Thursday, called for synergy among regional security outfits in Nigeria to ensure better security and proper coordination in the country.

The News Agency of Nigeria (NAN) reports that they made the call at the second installation anniversary of Iba Gani Adams as the Aare Onakakanfo of Yoruba land, held at Ikeja, Lagos.

Joel Okei-Odumakin, President, Women Arise for Change Initiative, said that there should be synergy amongst regional security outfits irrespective of the names they were called or wherever they were formed.

“Let them ensure that those who are at the helm of affairs in term of security continue to network.

“They should have enough synergy in the way it is reported and coordinated so that at the end, they would take the score card and know where to put more efforts.

“This will also ensure better guarantee of lives and property,” she said

Odumakin also lauded the creation of ‘Amotekun’, the South-West regional security outfit, which she said was long overdue.

She said there was need for necessary support to ensure that Amotekun became a strong effective outfit complementing the security agencies in fighting crime and criminality in the region.

According to her, it will help to protect citizens more and complement community policing work of the Nigeria Police.

She said Amotekun was not created to compete with state police but to complement their roles in ensuring the security of lives and property.

She advised that Amotekun must not be used to heat the polity in the country, saying that the country was already grappling with the pains of the colossal loss of lives and property in recent times.

“A life that is lost can never be brought back, that is why l support anything that can be done to protect lives.

“I do not want loss of lives again, it pains and breaks my heart each time a life is lost,” she said

Also speaking, Yinka Odumakin, Spokesperson of Afenifere, said that the Yoruba nation had accepted the Southwest regional security outfit to enhance security in the region.

Odumakin noted that Yoruba land was under siege, as such the regional security outfit had been overwhelmly accepted by the Yorubas.

According to him, the only condition for abolishing of Amotekun was the proscription of all other regional security outfits in Benue, Kano, Bornu, etc.

Nigerian Comedian, AY Shares Lovely Photo Of Himself And His Two Daughters

IPOB: What Will Happen If Nnamdi Kanu Returns For Mother’s Burial – Police