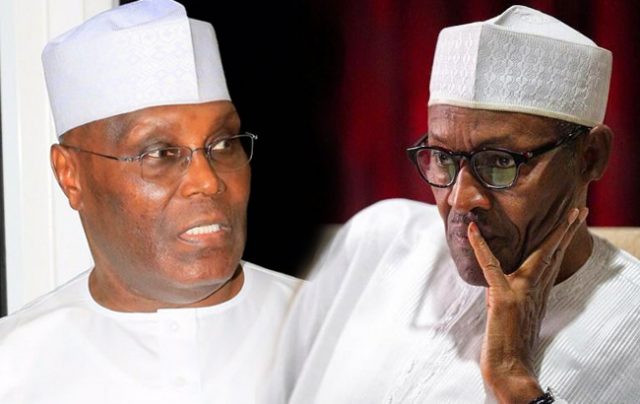 The candidate of the All Progressives Congress (APC) in the February 23 presidential election, President Muhammadu Buhari, and his Peoples Democratic Party (PDP) counterpart, former Vice President Atiku Abubakar, wednesday adopted their final addresses at the Presidential Election Petition Tribunal, which has reserved judgment in the petition filed by Atiku against Buhari’s victory at the election.

In his final address, Atiku told the tribunal that the issue of Buhari’s qualification is not as trivial as the respondents would want the court to believe.

Atiku submitted that the issue is so crucial when viewed from the standpoint that “the president submitted to the Independent National Electoral Commission (INEC) affidavit containing false information of fundamental nature to aid his qualification for the presidential election.”

The former vice president who along with his party, the PDP, is challenging the declaration of Buhari as the winner of the presidential election, told the five- man panel headed by Justice Mohammed Garba that the respondents rather than attend to the issue of perjury raised by the petitioners, “unfortunately decided not to do anything on this grievous issue of qualification.”

Atiku and PDP had on March 18 filed their petition against the outcome of the presidential poll, alleging rigging, electoral malpractices amongst others and urged the tribunal to nullify the victory of Buhari at the poll.

Equally, the petitioners are asking the tribunal to nullify Buhari’s participation in the February 23 presidential election because he did not possess the necessary academic qualifications to run for presidency and for allegedly submitting false information to the Independent National Electoral Commission (INEC) to aid his qualification for the election.

They called 62 witnesses and tendered plethora of documents before closing their case at the tribunal.

While Buhari on his part called seven witnesses and tendered some documents in opposition to the petition, INEC and APC did not call any witness nor tendered any documents.

The tribunal after parties closed their case on August 1, 2019 adjourned till yesterday for the adoption of final written addresses.
Presenting his final address, Atiku and PDP, led by Dr. Levy Uzuokwu (SAN), said the respondents instead of defending the claim by the petitioners that Buhari failed to provide proof of any of the three certificates he claimed to possess, dwelled on the issue of whether the president could speak English language or not.

According to Uzuokwu, the mere fact that artisans on the streets can speak English language does not make them qualified to contest for presidency.

He said since they had led evidence to show that Buhari lied on oath in his form CF001 submitted to INEC for clearance to contest the February 23 presidential election, the tribunal should upheld the petition and grant the reliefs contained therein.

The petitioners drew the attention of the court to a portion of Buhari’s INEC form where he claimed to have three different certificates; comprising Primary School Leaving Certificate, WAEC certificate and Officers Cadet certificate.

The former vice president informed the tribunal that the claim of Buhari that he could read and write in English language as enough qualification for him was of no importance because ordinary artisans could also do so, adding that a grave allegation bordering on certificate was not addressed by Buhari as required by law.

The PDP presidential candidate also faulted the claim of INEC that it has no central server, adding that server is a storage facility, which include computer, database of registered voters, number of permanent voter cards and election results, among others, are stored for references.

He said the claim by INEC that it had no device like server to store information “is laughable, tragic and a story for the dogs.”
Atiku’s lawyer in the final address debunked the claim of INEC that collation and transmission of results electronically were prohibited by law in Nigeria.

He therefore urged the tribunal to uphold the petition and nullified the participation of Buhari in the election on the grounds that he was not qualified to have stood for the election, in addition to malpractices that prompted his declaration as winner of the election.

Usman said INEC did not transmit election results electronically because doing so was prohibited by law and that the commission did not call any witness because there was no need to do so.

In his defence, Buhari, through his counsel, Chief Wole Olanipekun (SAN), argued that Atiku’s petition was liable to be dismissed because it is lacking in evidence, merit and substance and that the petition is ill-advised and signified nothing.

Olanipekun cited Section 131 of the Constitution, which stipulated a minimum of secondary school attendance to qualify for election in Nigeria, adding that Buhari cannot go beyond that and that he does not need to tender or attached certificate before he is qualified to contest any election.

He said there was nothing in law to persuade the tribunal to nullify the February 23 presidential election as pleaded by Atiku and urged the tribunal to dismiss the petition with substantial cost.

The APC, represented by Mr. Lateef Fagbemi (SAN), in his own submission, said the petition lacked quality evidence that could warrant the nullification of the election as pleaded by the petitioners and urged the tribunal to throw out the petition and award huge cost against the petitioners.

Fagbemi told the tribunal that the petitioners called 62 witnesses only in a failed attempt to prove their allegations concerning 119,793 polling units, 8, 809 wards and 774 local government areas and local area councils being challenged by the petitioners.
He added that the witnesses were from 11 states only, including the Federal Capital Territory (FCT).

Fagbemi said the allegations of non-accreditation, invalid votes, deliberate depletion of petitioners vote, anomalies, over voting, wrongful collation of results in favour of Buhari and APC, as well as corrupt practices had been denied by the two respondents as being unfounded and non-existent.

Fagbemi contended that the failure to call witnesses across the states of the federation by the petitioners to establish their allegations as envisaged by law was fatal to the petition and made it liable for dismissal by the tribunal.

However, the tribunal chairman after taking submissions from all parties, reserved judgment in the petition to a date that would be communicated to the parties.

Speaking with journalists after the proceedings, Uzoukwu said Atiku’s petition would in one way or other expand jurisprudence in electoral matters.

He said his team had presented a good case and it was now left for the court to do justice.

My Love And Plan For Imo State Drives Me Crazy, Wish I Can Get...

One killed as soldiers, youths clash over pipeline surveillance contract