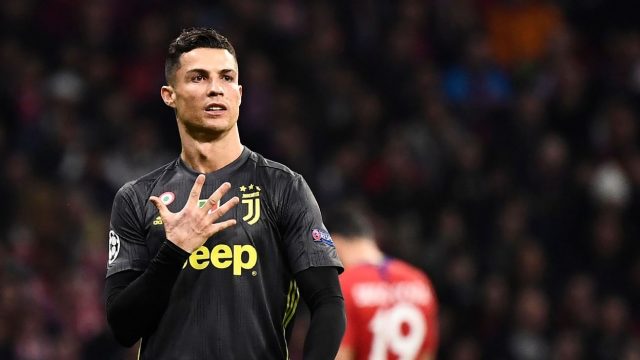 Juventus forward, Cristiano Ronaldo, responded to jeers from Atletico Madrid fans on Wednesday night, by holding up five fingers to represent the Champions League titles he has won.

The home fans booed Ronaldo all through the game, as they watched their team beat the Italian champions 2-0 in their round of 16 first leg clash.

Although the 34-year-old came closest with a thumping long-range free-kick which was saved by Jan Oblak, he was kept quiet by Jose Gimenez and Diego Godin.

Gimenez and Godin both went on to score during a five-minute spell in the second half, to give Atletico a two-goal advantage ahead of the second leg in Turin.

Atletico’s supporters at the Wanda Metropolitano Stadium, sensing Ronaldo’s frustrations, began jeering at him every time he got near the ball.

Ronaldo, who played for their city rivals Real Madrid for nine years, responded with the hand gesture towards the stands, reminding Atleti’s home support of how many Champions League titles he’s won down the years.

The forward lifted the trophy on four occasions with Real Madrid and once with Manchester United.

Zidane ‘Not Worried’ By Real Madrid’s Clasico Loss To Barca