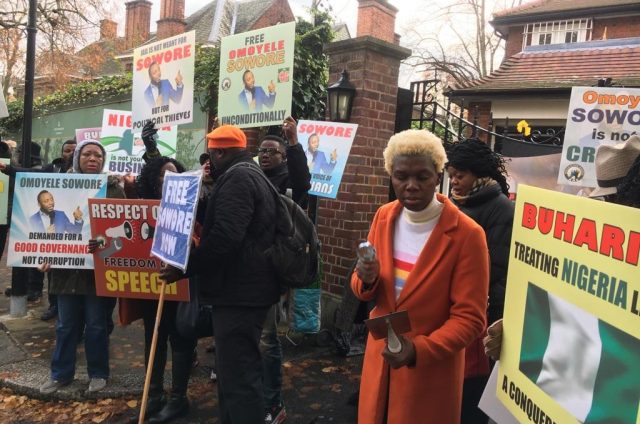 Nigerians under the aegis of Take it Back Movement and “Free Sowore Now” storms the official residence of the Nigerian High commissioner to the United Kingdom to demand the release of Omoyele Sowore, and different activists being held by the Department of State Security, DSS.

The protesters arrived at the venue at about 10.40 am. They chanted “free Sowore now” “free Olawale now”.

“It’s for this end that I’m of the view that the defendant ought to be released forthwith.”

Although it is not known if Nigeria President Muhammadu Buhari is inside the premises, the protesters chanted solidarity songs and accused the president of trampling upon the rights of the detained activists and those of the judiciary and the generality of Nigerians.

One protester mocked President Buhari, saying he does not “have d mental capacity to rule Nigeria.” They asked him to go home and stop enjoying the benefit of the NHS.

One of the cheerleaders said, Nigeria has become a “laughing stock, we are ashamed.”

With voices cracking, they chanted “solidarity forever, solidarity forever,” and argued that Sowore and other activists only demanded for good government and infrastructure and haven’t committed any crimes to be thrown behind bars by DSS.

They called on Nigerians to be part of the movement. “If we refuse to stand for what is right, history will not forgive us.” They chanted further, “Buhari, pack your load and go.”

Midway into the demonstration, the Islamic Human Rights Commission, IHRC also joined on behalf of Sheik Zakzaky, the chairman of IHRC, Massoud Shadrjareh, berated the Nigerian government of still keeping Zakzaky in detention .

Sowore was arrested by the DSS Saturday, August 3 for planning a nationwide protest tagged #RevolutionNow.

The Nigerian government filed additional charges against Sowore on Friday, September 20, a day before the completion of the initial 45 days the court allowed the DSS to keep him in custody.

Most NDDC Contracts Are Handled By Lawmakers – Akpabio