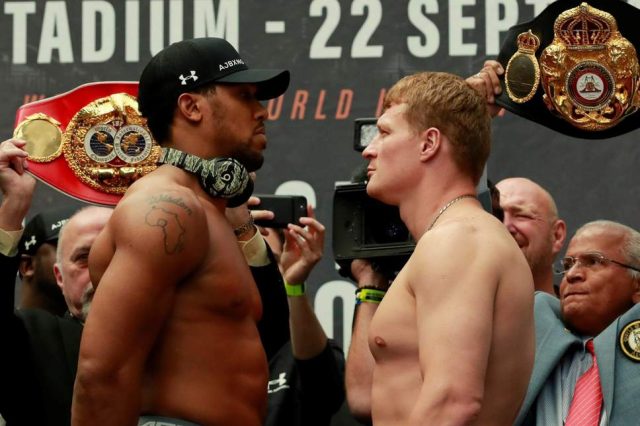 British-born Nigerian boxer, Anthony Joshua, has insisted he will have to ‘put on his dancing shoes’ after weighing in almost two stone heavier than Alexander Povetkin ahead of their world title showdown at Wembley Stadium this evening.

The scales tipped in favour of the champion with Joshua enjoying a significant weight advantage over his Russian challenger at 17st 8lbs, while Povetkin came in at an airy 15st 12lbs. A pretty substantial advantage, then AJ?

“Well,’ said the WBA, IBF, WBO and IBO title holder, ‘He will come at me quick fire.

“He’s going to be quick and fast so I better put on my dancing shoes and be sharp with my feet.

“I feel good though, I’m going to do some training after this just to keep myself ticking over and get rid of any cobwebs. We are nearly there now.’

According to dailymail.co.uk, hundreds of office workers in the bustling area of the Angel spent their lunch hour yesterday crowding in to watch Joshua and his challenger make their last public appearances before battle.

The 39-year-old Russian has played the part, too, appearing calm, collected and confident all week in the build-up to today’s showdown.

“Povetkin is a tough challenge and he is the man that I have to beat. But it’s nothing new to me so I’m not too bothered. I’m feeling calm and relaxed.

Meanwhile, former Nigerian boxer, Obisia Nwakpa, has advised Joshua to approach today’s fight with caution saying: “The two boxers have come a long way in this game, but as a coach and former boxer, what I am looking for is the man who is more technical, and has the power punch. This is Joshua’s time because for someone to dethrone a champion, he has to be more technically and tactically sound. I don’t see Povetkin beating Joshua in this fight,” Nwakpa told The Guardian yesterday.