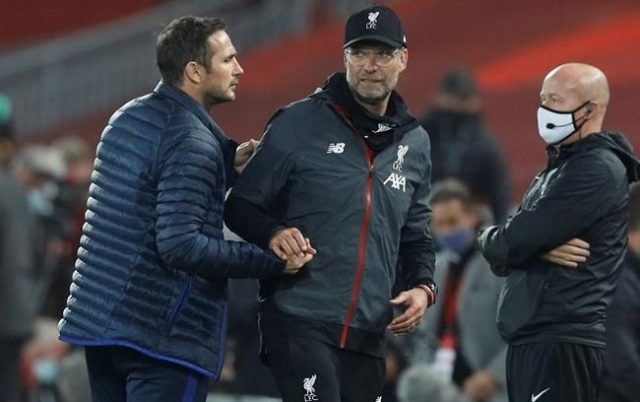 Chelsea manager, Frank Lampard apologizes for his expletive-laden row with the Liverpool bench during Chelsea’s 5-3 loss at Anfield but he felt a line was crossed in the Reds’ ranks.

A video of Lampard and Jurgen Klopp arguing on the touchline after referee Andre Marriner awarded Liverpool a questionable free-kick for Mateo Kovacic’s challenge on Sadio Mane was widely shared on social media after the game.

Spirits were high among Klopp’s squad as the game was played with a temporary stage fitted in the Kop end for Liverpool to be presented with the Premier League trophy at full time.

After the game Lampard warned the Premier League champions against becoming “too arrogant” but has now apologised for how he went about conveying his feelings in the heat of the moment.

“In terms of regretting having passion to defend my team, no. I could’ve maybe handled it slightly different to keep that language in.

“What I felt was, and I want to be clear about this actually, that some of the reports were that I was upset with the celebrating of the Liverpool team. Far from it.

“I would’ve had a beer with Jurgen Klopp after the game and toasted their performance this year, but there were things on the line that I didn’t like from their bench, not Jurgen Klopp, people behind the bench, which I felt crossed the line and that’s what got me agitated.

“But it’s done. Emotions run high among most managers and players and fans in this game. I regret the language and move on.”

Chelsea’s defeat means they head into the final day of the Premier League season needing a point against Wolves at Stamford Bridge to guarantee a top-four finish and a place in the 2020-21 Champions League.

Lampard insisted the Blues will not go out to play for a draw in a game that should see N’Golo Kante return from a hamstring injury that has kept him out for five matches.

“There’s a possibility [Kante] will feature. He’s trained for the first time towards a match pace this morning, it’s a decision I’ll have to make talking with him and the medical team, to see if he’s ready to start,” said Lampard.

He added: “We’ll approach the game to win it, I don’t think there’s another way. We’ll prepare right, respect our opponent. They’re obviously a very good opponent, we’ve seen that all season in the league.

“We prepare to win the game, we’re aware of the situation but we try to win.”