Five days after $43.4m, £27,000 and N23m (about N13bn) was uncovered in a building in Ikoyi, Lagos, the controversy surrounding the huge cash had yet to be resolved as of Sunday.

While the relevant agencies of government, who should unveil the identities of the owners of the seized funds, have maintained an undignified silence, the blame game on who stashed the money in the Ikoyi, Lagos apartment continued.

On Sunday, the Chairman, Presidential Advisory Committee Against Corruption, Prof. Itse Sagay (SAN), asked Governor Nyesom Wike of Rivers State to present evidence of ownership of the $43.4m, £27,000 and N23m (about N13bn) uncovered in a house in Ikoyi, Lagos, by the Economic and Financial Crimes Commission last Wednesday.

Also on Sunday, Wike sought divine intervention on the seized cash while the PDP insisted that the ruling All Progressives Congress used part of Rivers State money to fund its electioneering in 2015.

After the seizure of the money by the EFCC on Wednesday last week, the commission had gone before a Federal High Court in Lagos where it claimed that no one had come forward to claim the cash and obtained an interim forfeiture order.

The court then ordered that the money would be permanently forfeited to the Federal Government if no one came forward within 30 days to show proof that he or she owned the cash.

The National Intelligence Agency had also gone to President Muhammadu Buhari to claim ownership of the funds and also reportedly present documents as evidence that the funds were approved by former President Goodluck Jonathan.

However, Wike, on Friday, claimed the money belonged to the Rivers State Government but was stolen and stashed in the Ikoyi house by his predecessor and current Minister of Transportation, Rotimi Amaechi.

The governor had earlier said the money was proceed from the sale of gas turbine belonging to Rivers State by Amaechi. 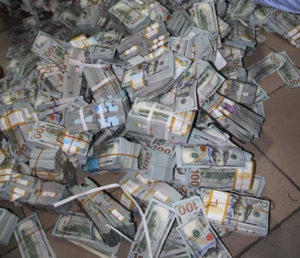 Amaechi had dismissed Wike’s claim, describing it as reckless and unfounded, saying he (Amaechi) knew nothing about the seized billions.

Speaking with one of our correspondents on Sunday, Sagay said Wike must present evidence that the cash belonged to the Rivers State Government or else he would not be taken seriously.

He said, “The court has already given an order that the seizure should be advertised and anybody, who has an interest or thinks he is the owner, should come in and file an affidavit and explain the basis upon which he is claiming the money.

“So, if Rivers State is serious about what it is saying, it has a fair opportunity to present its case. This should not be a matter of politics. This is something that has to be legally established; not politics of attack.

“The Rivers matter is pure politics as far as I am concerned. Since the NIA has claimed ownership, all they need to do is to go to court and present documents and satisfactorily convince the courts that it owns the money and it was obtained legitimately.”

But Wike, on Sunday, called on Christians in the state to seek God’s intervention over the seized $43m.

Wike explained that this was necessary in order to ensure that the Federal Government returned the money to the state government.

Speaking during an Easter service at Saint Peter’s Anglican Church in Rumuepirikom, Wike said the church had the responsibility to pray for God to touch the Federal Government of Nigeria to return the money to the state’s coffers.

“We need the prayer of the church because there is nothing that prayer cannot do. Pray that God should touch the government of Nigeria so that it will return the money to us. What we are interested in is for the money to come back to us,” he stressed.

Wike pointed out that contrary to the allegations by Amaechi, he had not declared war on the Federal Government.

According to him, the Rivers State Government is simply requesting the return of the seized funds to the state.

He said, “I cannot declare war on the Federal Government. Anybody bringing Buhari’s name should leave Buhari and face his own problems. The issue is who kept the money at the Ikoyi residence?

“The money was kept there by the Minister of Transportation, Rotimi Amaechi. No amount of blackmail; no amount of distraction will stop us from getting our money.”

Wike argued that “the selective war on corruption” would not help the development of the country.

The Vicar of Saint Peter’s Anglican Church, Rumuepirikom, Venerable Israel Omosioni, prayed God to grant the request of Rivers people for the Ikoyi billions to be returned.

A faction of the Peoples Democratic Party, led by Senator Ahmed Makarfi, has described as a circus show the uncovering of huge sums of money of various currencies and denominations on daily basis without any trace of the owners.

This was contained in a statement by the National Publicity of the sacked National Caretaker Committee of the party, Mr. Dayo Adeyeye, and made available to journalists in Abuja on Sunday.

“The government is at a crossroad as the whistle-blower and the EFCC are now shying away from telling Nigerians who own the money because undeniable evidence links the money to the proceeds from the sale of turbines by the former Governor of Rivers State and now Minister of Transport, Mr. Rotimi Amaechi.

“It has also been revealed that part of that proceeds was used by Mr. Amaechi to prosecute the campaigns of the APC in 2015.”

On government’s war on corruption, he said the policy had also failed, alleging that it was designed to punish and humiliate members of the PDP alone.

He said this was why many of such cases had been set aside and suspects discharged and acquitted while others remained in the custody of both the EFCC and the Department of State Services without trial.

He said, “Nigerians may also recall the several allegations of corruption made against prominent APC members that the anti-graft agency has not attended to.

“The Chairman of EFCC, Mr. Ibrahim Magu, has been rejected twice by the Nigerian Senate because of damning corruption allegations against him made by another agency of government.

“The same with the Chief of Staff to the President, Abba Kyari, the Secretary to the Government of the Federation, Mr. Babachir Lawal, and a host of other government officials against whom very serious allegations have been made.

“None of them has been subjected to the usual interrogations and investigation.”

He said the claim by the Director-General of the Nigeria Intelligence Agency that the agency owns the money “found” in a private residence was another bad comedy by the APC administration.

The faction said it was astonished at Buhari’s claim that he had met the expectations of Nigerians, stating that what was on the ground did not tally with the President’s claim.

It argued that the claim of victory over Boko Haram by the Buhari regime was also not true.

Adeyeye said the government was merely using the arms which he said were bought by the regime of the late Umaru Yar’Adua and Jonathan for the counter-insurgency operations.

He said, “The Jonathan administration set out to rebuild the region by establishing the Presidential Initiative for the North-East.

“This initiative covered all sectors in the rehabilitation efforts for the zone with comprehensive project cost and partnership.

“This project was later inherited by President Muhammadu Buhari and Nigerians will note how PINE under the APC’s watch has fared.

“It has been a monumental disaster with allegations of contract awards to ghost companies and grass-cutters while the IDPs endure daily hardship and starvation.

“Tragically, we have yet to see the outcome of the investigation into the Nigerian fighter jet that bombed the IDP camp in Borno State killing more than 200 persons.”

Adeyeye, a former Minister of State for Works, claimed that the PDP defeated Boko Haram before it handed over power in 2015, adding that it also reduced kidnapping and other anti-social vices in the country and there was peace in Nigeria as of May 2015.

He lamented that the country was also facing another menace of insecurity in the name of herdsmen, which he said were attacking and displacing communities across the country.

“Suicide is also gradually becoming a household name in Nigeria as citizens, who cannot cope with the current harsh economic conditions have resorted to taking their own lives,” he added.

But the Presidency said Nigerians had moved beyond the torn umbrella of the opposition PDP.

It said contrary to the party’s spurious claim, the people were appreciative of Buhari’s work and were expecting more which would come.

The Special Adviser to the President on Media and Publicity, Mr. Femi Adesina, said this while responding to a statement by the PDP, in which the party scored Buhari low in terms of performance.

Adesina wondered whether the statement was issued by the “authentic” PDP or “the spurious.”

The presidential spokesman said to begin to talk of the PDP which he described as a “house of commotion” was a mere distraction.

He said, “Which faction of PDP issued the statement, the authentic or the spurious?

“By the way, Nigerians have moved beyond the torn umbrella and are appreciative of what President Muhammadu Buhari is doing and expecting more, which will surely come.

“To talk of the ‘house of commotion’ called PDP now is mere distraction.”

Meanwhile, human rights advocacy group, Socio-Economic Rights and Accountability Project, says Buhari needs to speak on the recovered N13bn in order to clear the controversy surrounding the ownership of the funds.

The group, in a statement on Sunday by its Executive Director, Adetokunbo Mumuni, said heaven would not fall if the government unveiled the real owner of the recovered funds.

It argued that government could not afford to keep the citizen speculating on the real owner of the funds, stressing that the new whistle-blower’s policy must be matched with transparency.

“Democracy abhors secrecy, and for Nigerians to be able to hold elected leaders accountable, they must have access to information such as on the real identities of those behind the Ikoyi cash haul.

“This transparency is fundamental to the operation of the government’s whistle-blower policy, and inextricably rooted in the notions of good governance and the rule of law under the 1999 Nigerian Constitution (as amended),” SERAP stated.

It argued that keeping the nation in the dark on an issue such as the ownership of the Ikoyi funds was counter-productive to the government’s anti-corruption fight.

SERAP stated that this would encourage lack of accountability and would give the impression that there was something the government was hiding from the masses.

It added, “Public scrutiny is a prerequisite for changing harmful, entrenched practices. Rather than operating the whistle-blowers policy as hidden, mysterious mechanism at the far edge of democracy, this government should make the operation of policy more transparent and accessible to the public.

“It’s clear that as the EFCC continues to uncover more suspected looted or ill-gotten cash, those blowing the whistle will need greater level of protection. But without outlawing retaliation and attacks against whistle-blowers, and taking a firm stance on protecting them, the incentive of bounty rewards would be negated, as potential whistle-blowers may be discouraged from performing invaluable public interest service.” 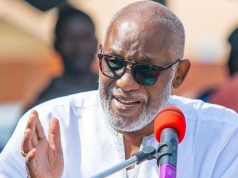 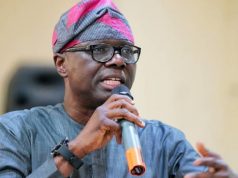 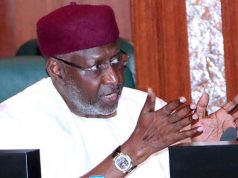 PDP Speaks On Saraki’s Return To The Party