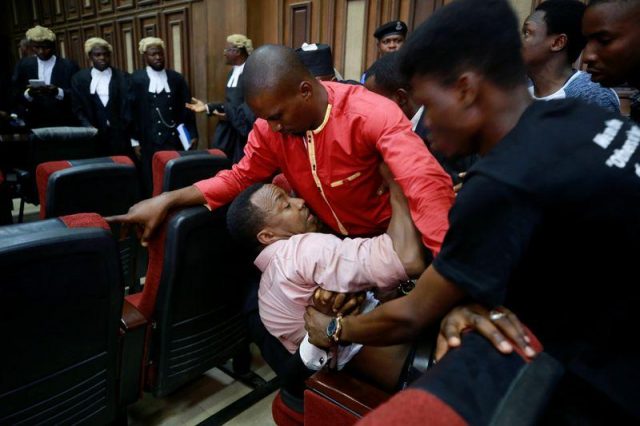 Former Vice President Atiku Abubakar on Friday said the invasion of the Federal High Court, Abuja, to arrest #RevolutionNow leader, Omoyele Sowore was a rape of the sanctity of the court.

The Presidential candidate of the Peoples Democratic Party in the last election said the act is unacceptable, stressing that Nigeria is not a dictatorship.

Atiku said he was in extreme anguish of spirit having viewed the tragic dramatization that ran its course at the Federal High Court sitting in Abuja.

He said it was sad that the agents of the state could cause a commotion in court in order to frustrate the judgment of a competent court.

According to the elder statesman, never in the history of Nigerian democracy has a judge been treated in such a disdainful and brazen attack on not just her person and office, but on the entire judiciary.

“This is unacceptable. It is a rape on the sanctity of the court. Nigeria is not a dictatorship. We are a democracy, no matter how inconvenient this fact is to the powers that have forced themselves on us,” Atiku said.

He called for an immediate inquiry to be set up to identify those responsible for the maltreatment meted out to Justice Ijeoma Ojukwu and the desecration of her court, and indeed the Nigerian judiciary.

“They must be sanctioned to the highest extent permissible by our laws.”

He further called for all law enforcement agencies in Nigeria to immediately respect not just the court order made by Justice Ojukwu, but the order of any court in Nigeria, on any detainee, be it Omoyele Sowore, Sambo Dasuki or Ibrahim Zakzaky, among others.

Atiku said the nation cannot have a situation where its government is quick to obey foreign court orders and even quicker to disobey domestic court orders, adding that this is symptomatic of a mindset that is servile to foreign powers and brutal to Nigerians.

“Without the rule of law, there can be no rule at all. Power in Nigeria still flows from the people, not from the barrel of a gun. I call on all men and women of goodwill not to keep quiet or sit on the fence at times like this.

“To keep Nigeria democracy is the paramount duty of all concerned stakeholders. Please speak up against this tyranny and side with the Nigerian people,” Atiku opined.

Operatives of the Department of Security Service (DSS) on Friday re-arrested Mr. Omoyele Sowore barely 24hours after his release.

Mr. Sowore was released on Thursday night after the court gave Nigeria’s secret police a 24-hour ultimatum to release him.

The court also awarded N100,000 against the prosecution for failing to comply with court orders requesting the release of Sowore and for not serving the defence counsel with necessary documents early enough.

At the resumed hearing on Friday, Justice Ijeoma Ojukwu after court proceedings adjourned the case till February 11 and 12 and 13, 2020 for definite hearing.

But as everyone filed out of the courtroom, no fewer than 15 armed officers of the DSS, who had laid an ambush for the defendants, made their way towards Sowore and his co-defendant Bakare, who put up a resistance but were eventually whisked away.

First photo of Dbanj’s smiling beautifully at his son…