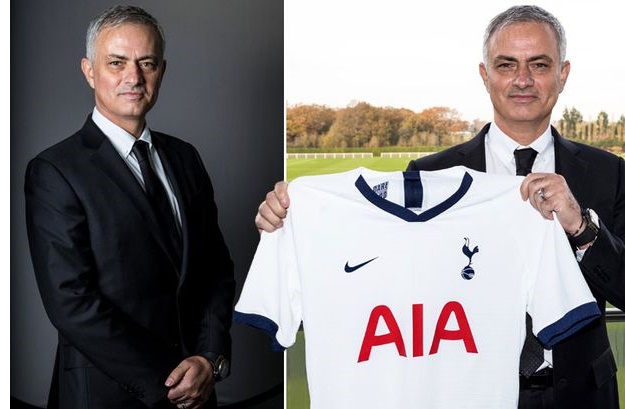 Jose Mourinho has been appointed as Tottenham’s new manager following the sacking of Mauricio Pochettino.

Former Chelsea and Manchester United boss Mourinho has signed a contract until the end of the 2022-23 season.

Tottenham chairman Daniel Levy, announcing Mourinho’s arrival, said: “In Jose we have one of the most successful managers in football.

“He has a wealth of experience, can inspire teams and is a great tactician. He has won honours at every club he has coached.

“We believe he will bring energy and belief to the dressing room.”

Mourinho said: “I am excited to be joining a club with such a great heritage and such passionate supporters.

The quality in both the squad and the academy excites me. Working with these players is what has attracted me.”

Mourinho took charge of his first training session on Wednesday and will be in the dugout for Saturday’s trip to West Ham, an always competitive London derby that Spurs will kick-off in 14th in the Premier League.

As part of a refreshed backroom staff, Joao Sacramento has joined from Lille to be Mourinho’s assistant. Long-time ally Rui Faria is currently working in Qatar.

Tottenham’s players were quick to express their gratitude and best wishes to Pochettino, who is likely to attract attention from a host of Europe’s premier clubs.

Harry Kane tweeted: “I’ll be forever thankful to you for helping me achieve my dreams. We’ve had some amazing moments in the last 5 and a half years that I will never forget. You were my manager but my friend as well and I thank you for that relationship. Good luck with your next chapter!”

The decision to appoint former Chelsea manager Mourinho has proved unpopular with vast sections of the Tottenham fan base however, with concerns about his man management and football philosophy.

A statement by the Tottenham Hotspur Supporters’ Trust read: “There are obviously concerns about how Jose and our club’s executive board will work together, and we are sure all fans would appreciate greater clarity on how the club sees this relationship operating in practice.

“The club must ensure it does not find itself in the same position in two or three years’ time, and we need to hear from the executive board what the long-term thinking behind this appointment is, and how it sees its role.”

‘My Dream Of Becoming Politician Led Me Into Cultism’ – Undergraduate